Learn how COVID 19 is impacting children's hospitals across North America at kidscantwait.org I've been participating in Extra Life since 2010 when I heard about it from the GameEnthus Podcast. Extra Life, at first, was an excuse for me to  play videogames and not feel guilty about doing so. I felt it as a challenge to stay up for 24 hours to play videogames.  Over the years, I became more involved and started to understand what it was I was actually doing (or supposed to be doing). Since then, I personally have raised $10000 over the 10 years I've been doing this with last year being my second highest by raising over $2200. I found out that Duke Childrens' Hospital (the CMN Hospital I play for) in 2014 has treated 66,000 kids and that money raised went to help facilitate some of the treatment along with the entertainment that the kids get to enjoy while they are staying which is an average of about 10 days.

This year, we're kicking it up a notch! As some of you may know, I have a 4 year old son name Kaiden. Before we were able to meet him, we were told Tiffany was to have a C-section to get him out because Tiffany came down with a bacterial infection and there was a possibility that it could spread to Kaiden. He was born at 5:29am and I was briefly able to see him before he was whisked away. Tiffany barely got to see him because she was still a bit loopy from the surgery. They took him off to Neonatal Intensive Care Unit (NICU) where they were treated him for not only a possible infection, but an highly irregular breathing rate. Luckily for all of us, both turned out okay. There was no infection and his breathing stabilized.

But that isn't the story. The story was what I was able to observe while with my son during those two days in the NICU. I had the opportunity to see all the other children, mostly premature, who had been born and had been spending the first days, weeks, and possibly months of their lives in that hospital. How they were no bigger than the iPhone 12 Pro Max you have sitting in your pocket.

Also, I wasn't able to attend or participant in any of the big game day events last year. Kaiden had become very sick at 2 months old and we rushed him to the ER. I have never seen a spinal tap performed and it was hard to watch my first one being performed on an infant. They do this so they can understand what's wrong with children that have not yet had their shots (he was supposed to get his the following week). 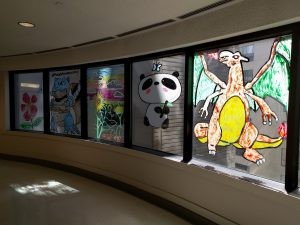 It was at these moments I realized that Extra Life has become more than "This is the right thing to do". I knew that I was raising funds for these children, their parents, and their families who go through so much. As a new parent, I'm only beginning on a journey that has already changed my life and has given me such a new outlook on life.

If you would like know more about Extra Life, you can visit their about page. From there, you can sign up to participate on the big Game Day in November!