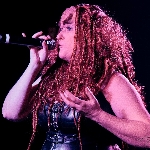 majQa' SuvwI'pu'! It's a new year and that means a new Klingon Pop Warrior Extra Life battle has begun!

Few things bring me more joy than my annual Extra Life event. These kids facedown way scarier stuff than Romulans and the Tal Shiar. As a warrior, it's my duty to The Empire to make sure the next generation of warriors is happy and healthy and ready to take on their enemies!

I pledge to play games for 24 hours in a glorious livestreamed marathon event. Your donations unlock milestone challenges. The more we raise, the weirder & more delightful my stream gets!

ACHIEVEMENT UNLOCKED: My first milestone is always $470 and I unlock putting on my ridges live on the stream! It's tradition!

ACHIEVEMENT UNLOCKED: $800 raised means you get to vote on what I'll wear on the stream. Cheesy "Holodeck" costume or a onesie... you decide!

ACHIEVEMENT UNLOCKED: $1100 raised! This will be the 4th year, I let donors & fans vote on a song for me to translate!
The votes are in!! First song translation is: Seven Nation Army - The White Stripes

ACHIEVEMENT UNLOCKED:  The new songs and old favorites will get performed live on my October 29th 24-hour marathon stream!

ACHIEVEMENT UNLOCKED:  We've hit $2100! Donors will get to join a special Discord channel and come on the stream for party games and laughs!

$2600 will be a 3rd song translation!
Hitting this milestone unlocks: Shout - Tears for Fears

What will this year's food challenge be? When we hit $3000 it will be revealed. This year we'll be revisiting an old challenge... but which one?

$3500 will be a 4th song translation!
Hitting this milestone unlocks: Rhiannon - Fleetwood Mac

If I hit my goal of $4000 in time for Extra Life Day, we'll see about making a new EP happen with the 4 songs from this year's Extra Life in Q1 2023. (gotta give us time for holidays, recording, mixing, and mastering!)