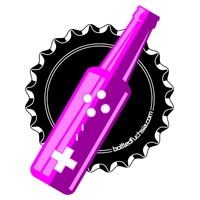 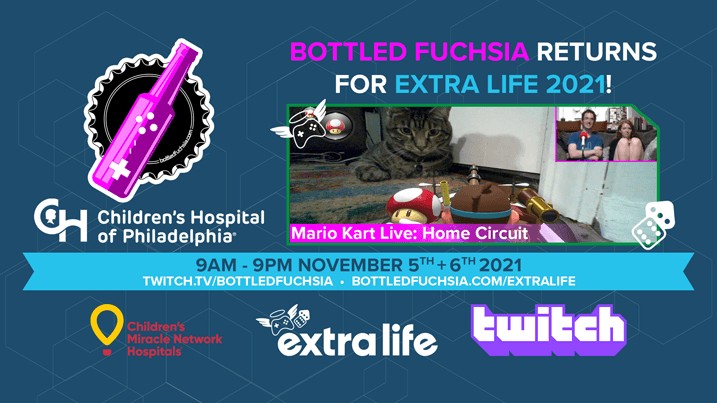 The Bottled Fuchsia Extra Life marathon will begin at 9 AM on November 5th, 2021!

Extra Life is an annual fundraising and gaming event that benefits Children's Miracle Network Hospitals. Donations collected by us through this page will go to The Children's Hospital of Philadelphia, so this is your chance to do some good and help children in need! Donations are tax-deductible, and 100% of the funds go straight to the hospital. Click the Donate button at the top of this page to contribute!

Bottled Fuchsia began as a group of friends podcasting about video games way back in 2012, and grew into video production, convention coverage, and livestreams. It's been a while since we've dusted off the mics and webcams, but don't worry. We haven't lost the recipe for bottling more Fuchsia someday.

Our first Extra Life stream was a 24 hour event in 2013, when we were Team Moon Moon under Captain Deb. That makes 2021 our ninth year! Our past streams included such great moments as:

This year, we're hoping to get some multiplayer VR going on Friday morning, followed by Cory playing a full run of Super Metroid. Aaron will attempt to stream gameplay from an Arcade 1up Star Wars Pinball table to close out the stream around 8 PM Friday night. Saturday morning will kick off with another Destiny 2 raid with clan Hullo, then Cory will resume his natural state of being the night in Arkham City. Aaron and Kitty are going to try some lesser kart racers after that, and then around 6 PM Saturday night we'll have our annual Jackbox event.