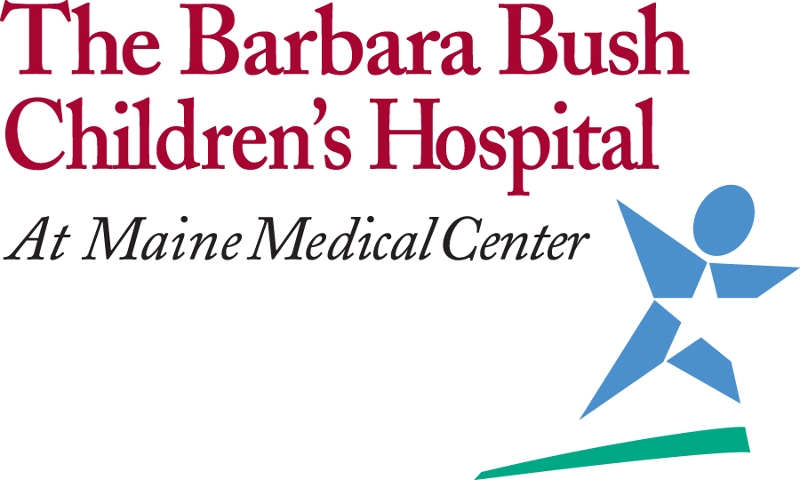 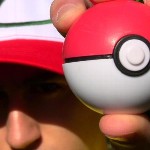 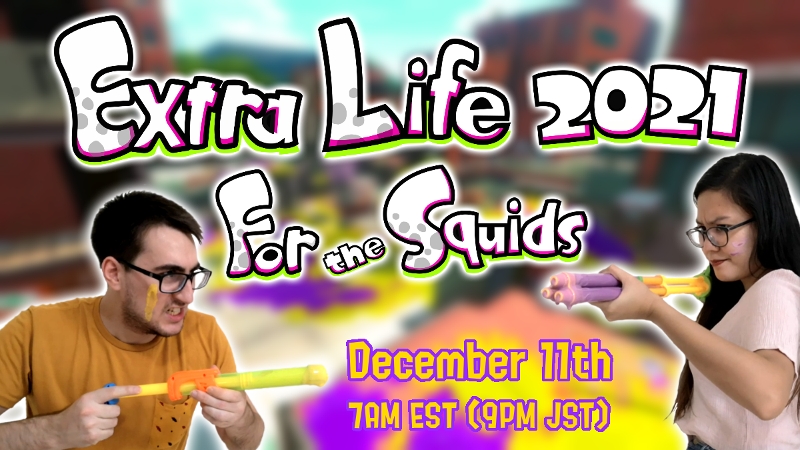 This year's live stream will be held on December 11th at 7AM EST! (Dec 11th 9PM Japan time)

What is Extra Life?

Many of you already know what Extra Life is all about. For those of you that don't, it's an event each year where gamers from all over the world participate in a 24-hour video game marathon in order to raise money for sick and injured children.

Here’s how it works:

People sign up, choose a children's hospital to support, ask for donations, and play games. It doesn't matter what the game is or even if you fall asleep before 24 hours is up, what matters is how much you can raise for your hospital. This year, as always, I'm playing in support of the Barbara Bush Children's Hospital.

My goals for this year:

Last year I successfully cleared all 120 shrines in the Legend of Zelda: Breath of the Wild, found all 13 memories, and defeated Calamity Ganon. This year I'll be playing Splatoon 2! Here are my individual goals for this year:

Hospitals like Barbara Bush rely heavily on donations. There are many families who do not have the means to pay for expensive medical treatments, which has only become exacerbated by the Covid-19 pandemic. You can help kids battling cancer, cystic fibrosis, and other accidents and illnesses by making a donation today. Every dollar counts. Thank you for your support! 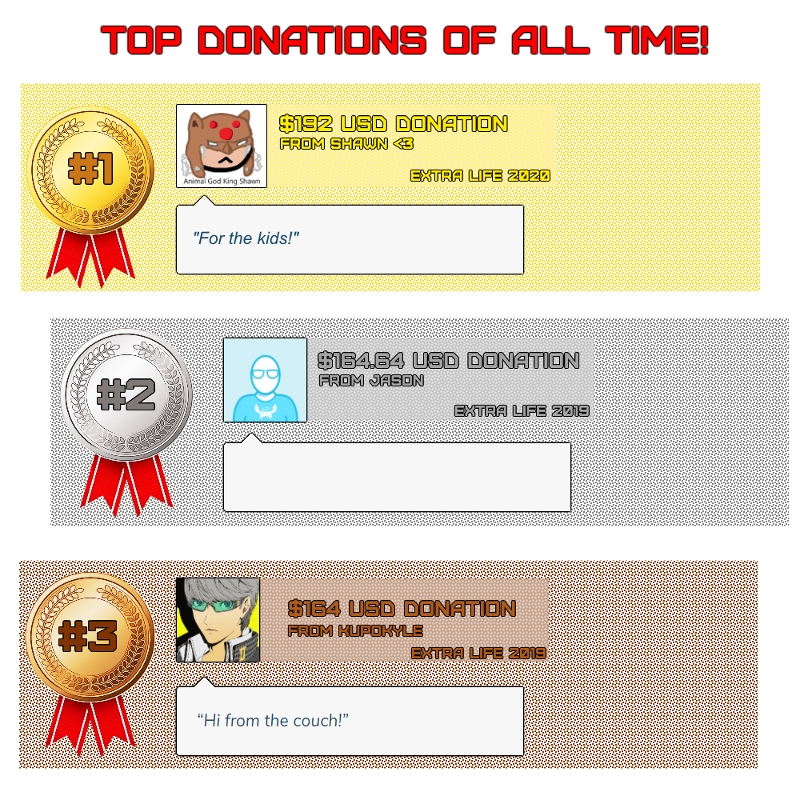 Over the past seven years, I have raised a whopping $8018.32 for the Barbara Bush Children's Hospital thanks to the generous donations from all of you. Let's make year 9 a success too!

I played through The Legend of Zelda: Ocarina of Time with the goal to beat it 100%. I did it in 16 hours flat, raising $120. Aside from being an amazing game and one I've beaten 100% countless times in the past, I chose to play Ocarina of Time because I was curious to see if I knew it well enough to beat it in a single sitting. You can really see the evolution of my streams over time. I wasn't anticipating doing a stream but since friends showed some interest in it, I ended up last-minute pointing my laptop webcam at the projector screen as I played, which is why the game is a bit slanted in the below screenshot. Messy, but it got the job done! 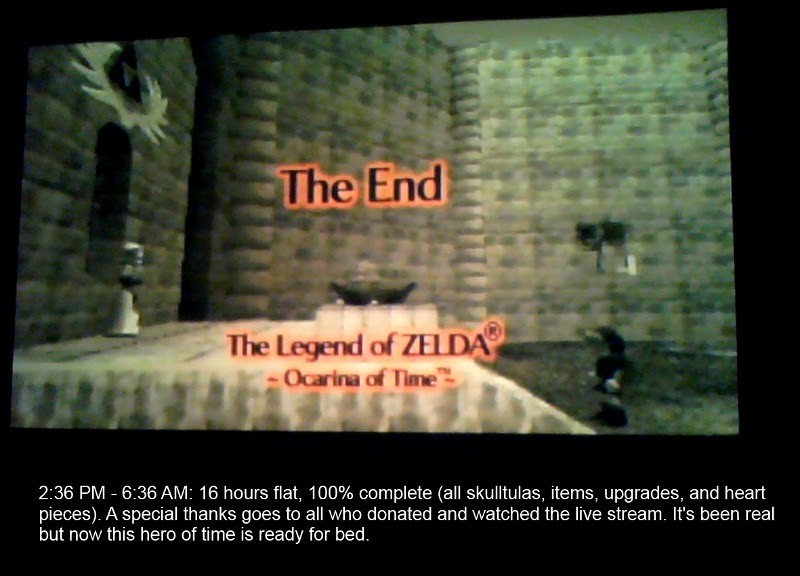 Not knowing how to step it up from the previous year, I decided to play through the harder version of Ocarina of Time, the Master Quest Edition, beating it 100% in 18 hours and 8 minutes and raising $715. This was the first year I made a promotional video to advertise and explain to my friends exactly what I was doing (while the year before I simply wrote a couple Facebook updates and didn't really know that much about the event). While being on crutches at the time, I had lots of time to sit and think which is how, one week before the event, I came up with the idea to make a video. With six times the amount raised from the year before, I'd say it was a successful endeavor despite the production being limited due to time and my injury. It was also the first time I set up a proper stream, although I lacked a face camera and mic. You can watch the promotional video here.

I played Pokémon Yellow (and some of Red and Blue) and caught all 151 Pokémon in 23 hours and 40 minutes, raising $380. I love Zelda, but since Extra Life was becoming a yearly tradition for me, I thought it was time to start exploring some of my other beloved franchises; and what better way to do that than complete the Pokédex in my very first Pokémon game ever? As a kid, this endeavor took me several years to complete and so I wondered if it was possible to do it all in under 24 hours. I also finally managed to get a proper stream going with a face cam, microphone, and updated my progress as I played. Fun fact: this was the only year to have raised less than the previous, which I attribute to many of my friends just graduating college and having to pay off loans while looking for work. That, or maybe they just really hate Pokémon, who knows! Filmed in Maine, New Hampshire and Vermont, this was my first multi-state video production. You can watch the promotional video here. 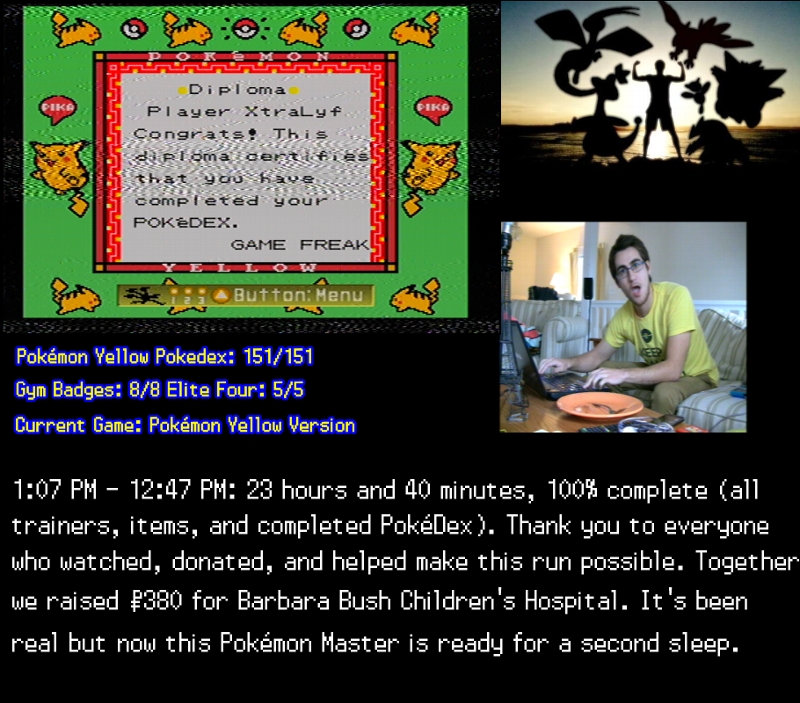 I played Super Mario Galaxy, getting all 120 stars and defeating Bowser with both Mario and Luigi. It took me 26 hours and 58 minutes (...yeah... there was one rolling ball level that took over an hour...) and we raised a whopping $1021. I actually wanted to play Mario Galaxy 2, my favorite of the two, but I thought it would be better to do the first one first and save the sequel for another year. This was the first time breaking the $1000 mark and since I was going to be living in Korea the following year, I didn't know how feasible it would be to set up a stream there. I thought about 2016 possibly being my last year of Extra Life. Thankfully, I made it work overseas as well! You can watch the promotional video here. 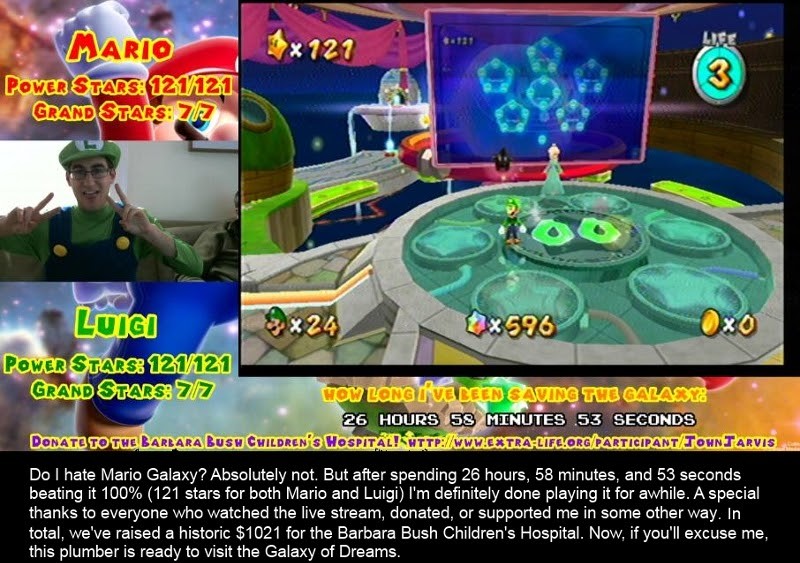 I played Pikmin 1, getting all 30 ship parts, growing 1000 pikmin of each color, and beating the game without any pikmin deaths (okay, I reset the game and donated a dollar when I lost some pikmin). It took me a record low time of just 10 hours and 58 minutes (I swear it should have taken way longer) and we raised a crazy $1025. I was really not expecting to break $1000 again let alone break a new record, but was pleasantly surprised. Pikmin is probably the most underappreciated franchise of all time and while Pikmin 2 is my favorite of the trilogy, I decided, like Mario in 2016, it was best to play the first one first. If you've never played any Pikmin games, play one ASAP! With the help of my foreign friends living in Korea, I managed to once again throw together another video. You can watch the promotional video here.

I didn't want another short year so I played three Kirby games back to back. I 100% beat Kirby's Epic Yarn (despite spending 2 hours on that stupid snowy 4-wheeler level), Kirby's Nightmare in Dreamland (I beat the whole game in less time than that stupid snowy 4-wheeler level), and Kirby's Return to Dreamland (using the Wiimote D-pad for that long made my thumb sore for an actual month). It took me 22 hours and 41 minutes and 40 deaths to beat all three games, donating a dollar per death. This was also the first year I got to use an Elgato capture device, which greatly increased the quality of the stream. I advertised my Twitch page and promotional video to all my Korean students, making 2018 my most watched stream ever with 50 active viewers at one point! In total, we raised an incredible $1171 for the Barbara Bush Children's Hospital, breaking the previous year's amount once again. You can watch the promotional video here.

Since I managed to complete three games the year before, I thought I'd step things up yet again by attempting to complete four Nintendo 64 games (Super Mario 64, Kirby the Crystal Shards, Pokémon Snap, and Yoshi's Story). This would prove to be a huge mistake as it took me 26 hours and 35 minutes to beat them all! This was mostly due to fooling around after beating Mario 64, attempting to collect all enemy cards in Kirby 64, and failing to get all the melons in Yoshi's Story (never mention this again!). Aside from these miscellaneous failures, here's the breakdown of how long it took to beat each game: I beat Mario 64 in 6 hours, 38 minutes, 26 seconds, Kirby 64 in 3 hours, 50 minutes, 4 seconds, Pokémon Snap in 2 hours, 14 minutes, 7 seconds, and Yoshi's Story in 11 hours, 56 minutes, 46 seconds. In total, we raised a record-breaking $1466.32 for the Barbara Bush Children's Hospital! I had to prepare far ahead since I was planning a 4-month trip to New Zealand and wouldn't be home until late December. This resulted in the first dual-country video production! You can watch the promotional video here. The entire stream can be found on twitch here.

After 8 years, I felt it was time to go back to my roots and once again play the franchise that started my Extra Life journey: The Legend of Zelda. I played through Breath of the Wild and completed all 120 shrines, found all 13 memories, and defeated Calamity Ganon in 22 hours and 56 minutes. I spent the remaining hour completing the Tarrey Town side quest. I streamed from the Philippines and had Kristoffer, the professional chef, make me food as I played. All in all, we raised an earth-shattering $2120, making it once again the greatest year on record, and during a global pandemic no less! I hope we can get even remotely close to that amount again in the future! You can watch the promotional video here. The entire stream can be found on Twitch here: part 1 and part 2. 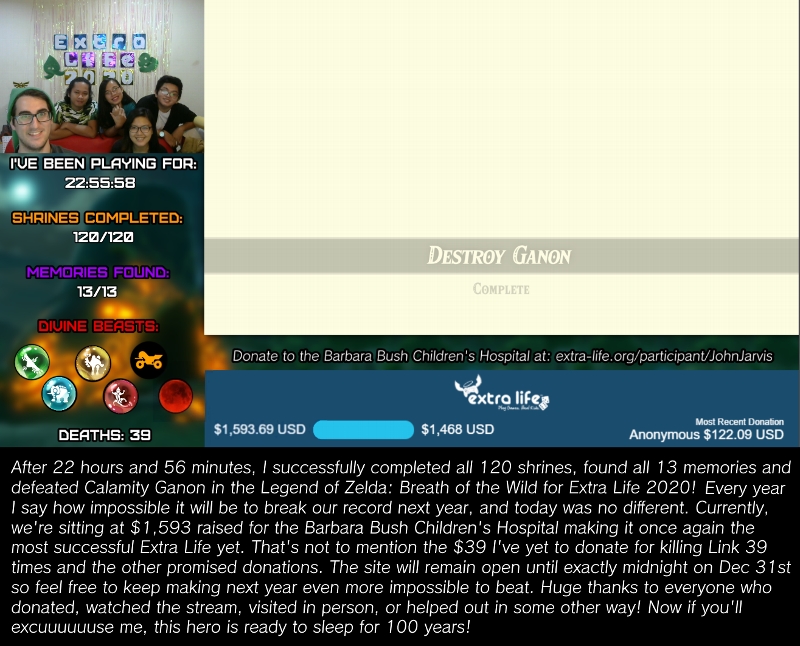 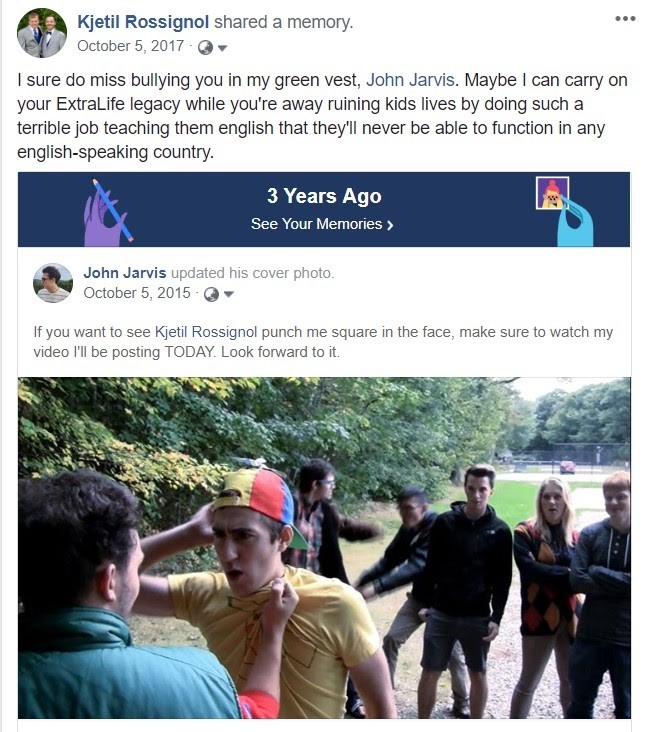 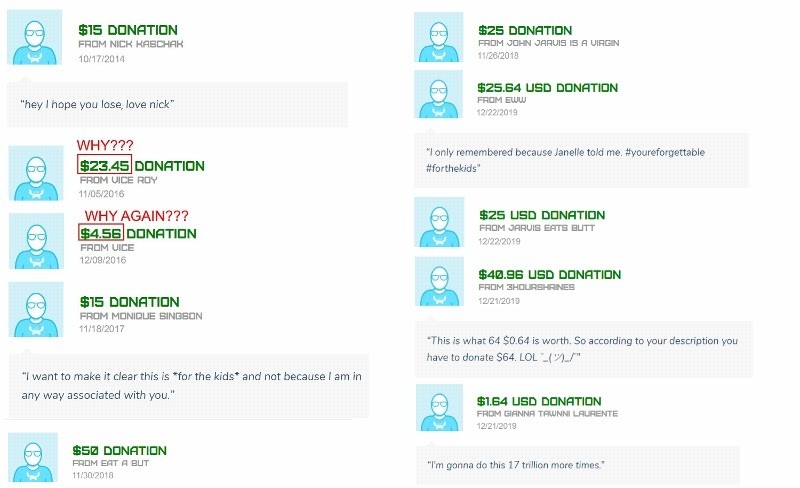 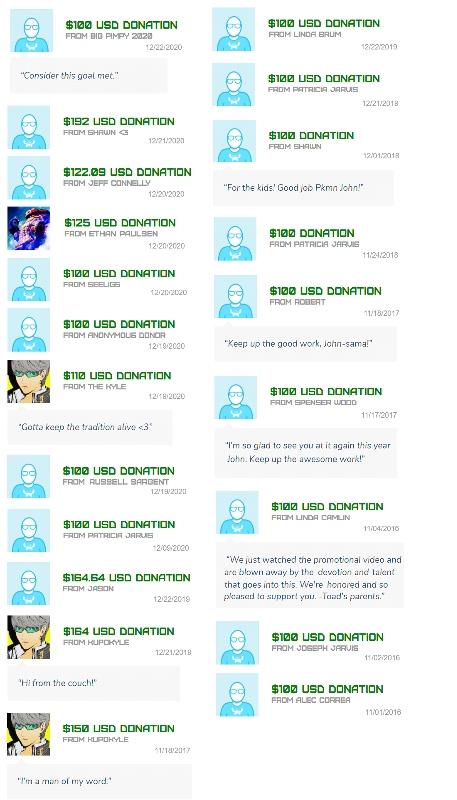